Tag Archives: Priestcraft To Be Avoided

What Makes These Mormons Peculiar?

“Why do these Mormons stir up such emotions in people, and why are they not considered Christian by some?” As we approach General Conference next month, authority issues are as relevant today as ever. Interesting questions and answers from Elder Jeffrey R. Holland of the Quorum of the Twelve Apostles, The Church of Jesus Christ of Latter-day Saints, as he spoke at Harvard Law School. Answers below.

Returning to my academic roots in New England, I am reminded today of—and stand with—a marvelous congregational cleric who, a century ago, had a little parish in Springfield, Massachusetts, about equidistant from New Haven and Cambridge, which seems appropriate. He said 100 years ago:

“The loss of respect for religion is the dry rot of social institutions. The idea of God as the Creator and Father of all mankind is to the moral world, what gravitation is in the natural; it holds everything else together and causes it to revolve around a common center. Take this away and any ultimate significance to life falls apart. There is then no such thing as collective humanity, but only separate molecules of men and women drifting in the universe, with no more cohesion and no more meaning than so many grains of sand have meaning for the sea.” [Henry Martyn Field]
⁞ 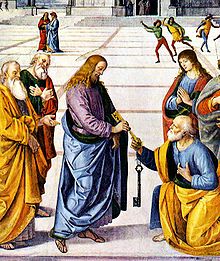 We are not considered Christian by some because we are not fourth-century Christians, we are not Nicene Christians, we are not creedal Christians of the brand that arose hundreds of years after Christ. No, when we speak of “restored Christianity”, we speak of the Church as it was in its New Testament purity, not as it became when great councils were called to debate and anguish over what it was they really believed. So if one means Greek-influenced, council-convening, philosophy-flavored Christianity of post-apostolic times, then we are not that kind of Christian. Peter we know, and Paul we know, but Constantine and Athanasius, Athens and Alexandria we do not know. (Actually, we know them, we just don’t follow them.)

Thus, we teach that:

1. God the Father and His Son, Jesus Christ, are separate and distinct beings[, both divine,] with glorified bodies of flesh and bone. As such, we stand with the historical position that “the formal doctrine of the Trinity as it was defined by the great church councils of the fourth and fifth centuries is not to be found in the [New Testament].” [Harper’s Bible Dictionary, Paul F. Achtemeier, ed. (1985), Page 1099]

We take Christ literally at His word—that He “came down from heaven, not to do [his] own will, but the will of him that sent [him].” Of His antagonists, Jesus said they have “hated both me and my Father.” These, along with scores of other references, including His pleading prayers, make clear Jesus’s physical separation from His Father, subordinating Himself to His Father, saying regularly, in one way or another, my Father is greater than I. However, having affirmed the point of Their separate and distinct physical nature, we declare unequivocally that They were indeed “one” in every other conceivable way—in mind and deed, in will and wish and hope, in faith and purpose and intent and love. They are most assuredly much more alike than They are different in all the ways I have just said, but They are separate and distinct beings as all fathers and sons are. In this matter, we differ from traditional creedal Christianity, but we do feel that we agree with the New Testament.

2. Next, we also differ from fourth and fifth century Christianity by declaring that the scriptural canon is not closed, that the heavens are open with revelatory experience, and that God meant what He said when He promised Moses, “My works are without end, and…my words…never cease.” We believe that God loves all His children and that He would never leave them for long without the instrumentality of prophets and apostles, authorized agents of His guidance and direction. The Book of Mormon and other canonized scripture, as well as the role of living oracles, witnesses to the fact that God continues to speak. We agree enthusiastically with the insightful Protestant scholar who inquired, “On what biblical or historical grounds has the inspiration of God been limited to the written documents that the church now calls its Bible? …If the Spirit inspired only the written documents of the first century, does that mean that the same Spirit does not speak today…about matters that are of significant concern?” [Lee M. McDonald, The Formation of the Christian Biblical Canon, rev. ed. (1995), Pages 255-56.]

3. Lastly, for today, we are unique in the modern Christian world regarding one matter which a prophet and president of The Church of Jesus Christ of Latter-day Saints called our “most distinguishing feature.” 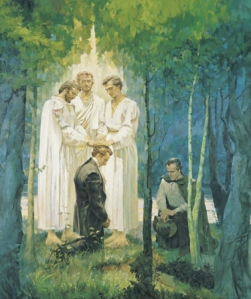 Peter, James and John Confirm the Keys to Joseph Smith and Oliver Cowdery

That is, divine priesthood authority to provide the saving sacraments—the ordinances—of the gospel of Jesus Christ. The holy priesthood, which has been restored to the earth by those who held it anciently, signals the return of divine authorization. It is different from all other man-made powers and authorities on the face of the earth. Without it, there could be a church in name only, and it would be a church lacking in authority to administer in the things of God. This restoration of priesthood authority eases centuries of questions and anguish among those who knew certain ordinances and sacraments were essential but lived with the doubt as to who had the right to administer them. Breaking ecclesiastically with his more famous brother, John, over the latter’s decision to ordain without any divine authority to do so, Charles Wesley wrote:

How easily are bishops made
By man or woman’s whim:
Wesley his hands on Coke hath laid,
But who laid hands on him?
[Quoted in C. Beaufort Moss, The Divisions of Christendom: A Retrospect (n.d., “no date”), Page 22.]

In The Church of Jesus Christ of Latter-day Saints we can answer the question of “who laid hands on him” all the way back to Christ Himself. The return of such authority is truly “the most distinguishing feature” of our faith.

Thank you for your courteous attendance. I will be pleased to devote the remaining time to your questions. I leave my love, my witness, and a personal blessing on every one of you for whatever righteous need you may have, in the name of Jesus Christ, amen.

Clearly, acting with divine authority requires more than mere social contract. It cannot be generated by theological training or a commission from the congregation. No, in the authorized work of God, there has to be power greater than that already possessed by the people in the pews or in the streets or in the seminaries—a fact that many honest religious seekers had known and openly acknowledged for generations leading up to the Restoration.

It is true that some few in that day did not want their ministers to claim special sacramental authority, but most people longed for priesthood sanctioned by God and were frustrated as to where they might go to find such.

Through me, my sons also have this authority to bless their own families and to carry on the work of righteousness as God would do himself if He were here counseling and coaching us. I have learned for myself that true strength comes from magnifying the priesthood. Clearly, that makes me peculiar. I also know that everyone has the blessings of this authority available to them.

1. Watch or listen to Elder Holland at Harvard Law School below. Or read.

2. The priesthood of God isn’t for some and not for others — It’s for any of us, for all of us. It applies equally to people of any gender, in any country, of any position in life. For example, watch how Sheri Dew answers the great question: “In the Church of Jesus Christ of Latter-day Saints, what do women get?”

3. Why is authority important? An 18-year-old learns one reason.
“Sanctify Yourselves”:

(Or same video at lds.org link.)

(Or same video at lds.org link.) 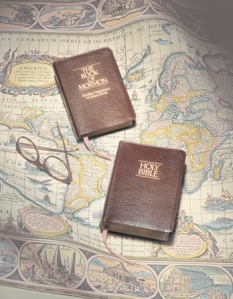