Women of Power, Women of Influence

This morning, I was struck by this thought-provoking sentence: “I don’t know one of [my own circle of girlfriends] who doesn’t have feelings of lingering discomfort regarding her own sexual past.” I read this in a footnote to a talk in a recent LDS General Conference interestingly titled, “The Moral Force of Women.”

The entire two-paragraph context by author Jennifer Moses is good:

So here we are, the feminist and postfeminist and postpill generation. We somehow survived our own teen and college years (except for those who didn’t), and now, with the exception of some Mormons, evangelicals and Orthodox Jews, scads of us don’t know how to teach our own sons and daughters not to give away their bodies so readily. We’re embarrassed, and we don’t want to be, God forbid, hypocrites.

Still, in my own circle of girlfriends, the desire to push back is strong. I don’t know one of them who doesn’t have feelings of lingering discomfort regarding her own sexual past. And not one woman I’ve ever asked about the subject has said that she wishes she’d “experimented” more.

In fact, the entire WSJ article is good, and not only because it stirred up a strident response. (See “Why Do We Let Them Dress Like That?”, Jennifer Moses, Wall Street Journal, 19 Mar 2011, Page C3). Here is a selection from the address that referenced Moses’ article:

[In the view of many in the world, in sharp contrast to God’s view,] there has long been a cultural double standard that expected women to be sexually circumspect while excusing male immorality. The unfairness of such a double standard is obvious, and it has been justifiably criticized and rejected. In that rejection, one would have hoped that men would rise to the higher, single standard, but just the opposite has occurred—women and girls are now encouraged to be as promiscuous as the double standard expected men to be. Where once women’s higher standards demanded commitment and responsibility from men, we now have sexual relations without conscience, fatherless families, and growing poverty. Equal-opportunity promiscuity simply robs women of their moral influence and degrades all of society. In this hollow bargain, it is men who are “liberated” and women and children who suffer most. (“The Moral Force of Women”, D. Todd Christofferson, LDS General Conference, Oct 2013. )

In his address, Christofferson also teaches us the importance of appreciating everyone’s influence for good, regardless of the ways they work all day: “A pernicious philosophy that undermines women’s moral influence is the devaluation of marriage and of motherhood and homemaking as a career. Some view homemaking with outright contempt, arguing that it demeans women and that the relentless demands of raising children are a form of exploitation. They ridicule what they call “the mommy track” as a career. This is not fair or right. We do not diminish the value of what women or men achieve in any worthy endeavor or career—we all benefit from those achievements—but we still recognize there is not a higher good than motherhood or fatherhood in marriage.” 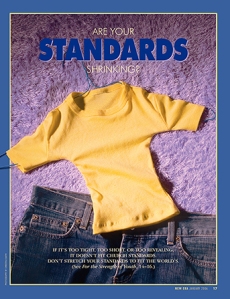 In a second footnote are cited important words from another address: “If being ‘selfless’ means a woman must give up her own inner identity and personal growth, that understanding of selflessness is wrong… But today’s liberationist model goes too far the other way, stereotyping women as excessively independent of their families. A more sensible view is that husbands and wives are interdependent with each other… The critics who moved mothers from dependence to independence skipped the fertile middle ground of interdependence. Those who moved mothers from selflessness to selfishness skipped the fertile middle ground of self-chosen service that contributes toward a woman’s personal growth. Because of these excesses, debates about the value of motherhood have, ironically, caused the general society to discount not only mothers but women in general.” (“Motherhood and the Moral Influence of Women”, Bruce C. Hafen, World Congress of Families II, Geneva, Switzerland, Plenary Session IV, 16 Nov 1999.)

Some may assume that these thoughts refer to virtue, to dressing modestly, or to the value of a working woman, rather than viewing them as a related whole. For me, the issue here is one of influence and of power. Women wield power and influence in diverse ways, and everyone should appreciate good work, independent of where a woman chooses to do it. I have learned for myself that, regardless of our views, it is selfish to say unkind things. We can learn to use our power and influence to build rather than to belittle, even if a person makes choices we would not make for ourselves. Women should not limit themselves to roles that others define for them. The far-reaching effects of the power and influence of women is well described in and certainly not limited to the why-do-we-let-our-kids-wear-immodest-clothes article by Jennifer Moses, Matt Walsh’s …Me?-Ha!-I-WORK! post, Sheri Dew’s two-are-better-than-one talk, or Julie Beck’s mothers-who-know address. “The world’s greatest champion of woman and womanhood is Jesus the Christ.” (Daughters in My Kingdom: The History and Work of Relief Society, Page 3.)

Early in her life, my wife nurtured a strong desire to be a woman of power and a woman of influence. She decided that she could do that most effectively by choosing to stay at home to raise a family. Her influence on our six adult children and on their families cannot be measured. That is influence; that is power. We are grateful for her wisdom to wield these skills in such a way as to have a true impact on society.

This entry was posted in Charity/The Pure Love of Christ, Family Relationships, Gender Roles, Personal Challenges, Serving Others, Virtue/Chastity, Worship/Testimony/Feeling Things Down Deep and tagged Be Yourself, Being Brave, Breaking Barriers, Come; Follow Me, Commitment, Fight For What's Right, Freedom To Choose, God's Way—Not Mine, Influence/Always Teaching, Out-of-the-box Thinking, Progression, Self-worth, Spectrum Of Opinion, Standards Of Behavior, Trusting Oneself, What Do Women Get?, Whirlwinds. Bookmark the permalink.

2 responses to “Women of Power, Women of Influence”